Acuite believes that the Indian banking sector is set to witness a fresh phase of consolidation over the medium term which will be primarily driven by large private sector banks. The sector has already seen the first round of consolidation involving public sector banks over the period 2017-20. Given the current buoyancy in the equity markets, there is a significant opportunity for large Indian private banks to explore the inorganic growth route through acquisition of smaller private banks that continue to face headwinds or even public sector banks where the government is considering a disinvestment. However, any such consolidation will be influenced by various factors like strategic fitment, expansion plan in particular region, compelling valuations, deposit franchise and technological compatibility.

The consolidation in the PSB (public sector bank) sector has already taken place over the last 5 years through the initiative taken by the Government of India with an intent to achieve scale and balance sheet strength. While it had started with the consolidation of the subsidiaries of State Bank of India into the parent bank with effect from FY18, it picked up speed with the merger of Bank of Baroda, Punjab National Bank, Canara Bank, Union Bank of India and Indian Bank with eight banks respectively in FY20/21. With the completion of consolidation in the first round, there are now twelve PSBs i.e., seven large public sector banks (PSBs), and five smaller ones against 27 PSBs in 2017. The consolidation of PSBs has been undertaken to enhance their competitiveness, capital position and operational efficiency which has seen a gradual deterioration over the last ten years. Clearly, a significant and consistent shift in business (credit+ deposits) has been witnessed from public to private sector banks (PVBs) over the past few years. Nevertheless, the consolidation concluded among PSBs and a significant quantum of fresh capital infusion in these banks by the government may mitigate the risk of a further loss in their market share.

Acuité has undertaken a study of the segment-wise performance metrics of Indian scheduled commercial banks that not only highlights the increased gap between public and private sector banks but also the benefits of scale that is emerging in the latter category. The study shows that large PVBs continue to grow their market share at the cost of smaller PVBs or old generation private banks.

Many small sized private banks continue to face chronic asset quality problems which constrain their capital availability, hence there is uncertainty on their scalability and business sustainability over the short to medium term. Challenges related to corporate governance and ability to raise capital coupled with the economic slowdown have significantly weakened their balance sheet. The pandemic has further worsened their performance and added to their woes. These challenges are clearly going to translate into inorganic growth opportunities for the larger banks. Hence, Acuité believes that consolidation in the private banking space is a distinct possibility in the near to medium term. The takeover of Lakshmi Vilas Bank by DBS Singapore is one such example of the consolidation trend. 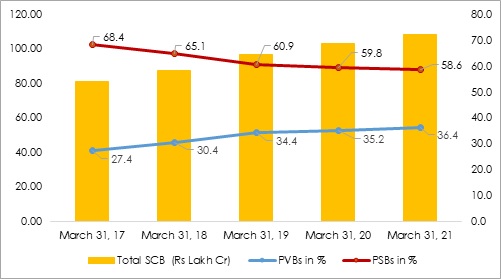 Public sector banks have been dominant in not only the domestic credit space but have also enjoyed a very strong domestic deposit franchise since the nationalisation of the banks in 1969. However, they have witnessed a steady drop in both credit and deposit market share over the last one decade. This has got accelerated over the last five years with the impact of the Asset Quality Review (AQR) and the subsequent spike in NPAs in the banking sector which had hit PSBs in a big way and led to some of them slipping into PCA (Prompt Corrective Action) mode with limited ability to expand the balance sheet. 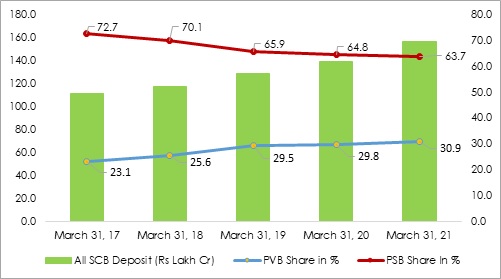 While Public Sector Banks (PSBs) continue to dominate the Indian banking industry with majority market share in both deposits and advances, PVBs have been steadily gaining market share. Over the last five years, PSBs’ market share has dropped by around 10.0% in both deposits and advances, which has been largely taken over by PVBs. Clearly, asset quality and the resultant profitability as well as capital challenges have been the key factor in the slow down of the PSBs. This has been an opportunity for the large PVBs, who have cemented their market position in the domestic banking system through easier access to capital along with early initiatives on technological upgradation and enhanced customer experience.

Within the PVBs, category the growth has been primarily driven by a few large private sector banks. Given the investor confidence, large as well as some select mid-sized PVBs have been able to raise funds through capital markets whereas access to capital has been relatively challenging for smaller and old PVBs. Consequently, the larger banks have built a comfortable capital cushion which can insulate them from any asset quality stress. The advances’ growth of smaller PVBs have been lagging their bigger counterparts which have been reporting double-digit growth rates on an average over the last five years. Despite the impact of the Covid pandemic on the overall business, profitability and asset quality, larger and few mid-sized PVBs have been able to raise capital not only equity (QIP) but also through Tier I/II bonds in FY21 and H1FY22. 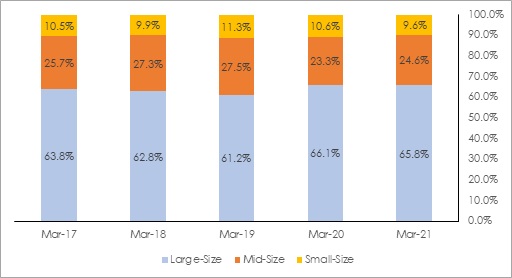 While the average group performance of small-size PVBs have been sub-optimal, there are a few in that category which have performed significantly better than their peers. This can be attributed to their ability to raise capital, improve their liability franchise, embrace technology, establish sound risk management practices and in some cases, induct a professional and competent management team. On the other hand, several old generation small PVBs continue to grapple with asset quality pressure, corporate governance concerns, limited financial flexibility and a chronic weakness in their earning quality. 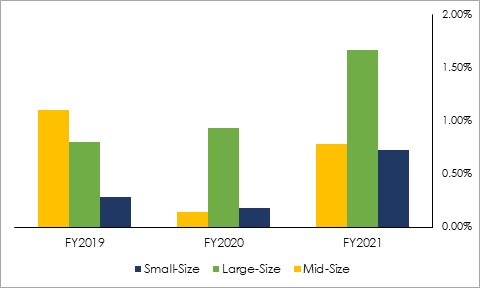 While there has been a recovery in earnings across all the banking groups i.e. PSBs and PVBs alike since FY19, the rebound was sharper for large-size PVBs. The low return on assets (RoAA) for smaller private banks in FY19 and FY20 in the range of 0.2%-0.3% reflects their vulnerability to a challenging operating environment; despite some improvement in profitability during FY21, small-size PVBs continue to have RoAAs less than half of that of large PVBs due to persistent asset quality pressures and elevated operational costs.

Although there is no dearth of capital for better managed large and mid-size PVBs, regional and smaller PVBs with relatively high concentration risks in the corporate sector, significant exposure to the MSME segment and limited track record in mobilisation of capital, will continue to witness capital impairment risks. Given the limitation in their geographical franchise, their ability to bring about a structural improvement in their lending and deposit profile is uncertain. In particular, the Covid pandemic and the consequent disruptive lockdowns have had a larger impact on the asset quality of smaller PVBs. In our opinion, such a scenario is expected to trigger a further consolidation in the domestic banking space over the medium term.