Back
Since Feb-22, the Reserve Bank of India has been surprising on the monetary policy front. The central bank maintained status quo on reverse repo rate in Feb-22 against market consensus expectation of a 20 bps reverse repo hike. The next policy review in Apr-22 saw a bigger surprise as the RBI opted for a one-shot normalization in the width of the policy rate corridor from 90 bps to 50 bps while replacing the reverse repo rate by the Standing Deposit Facility (SDF), introduced at 3.75%. In effect, this was more aggressive than market consensus expectation of narrowing of the policy rate corridor to 70 bps via a 20 bps hike in the reverse repo rate.

The surprise factor escalated significantly in May-22 when the Monetary Policy Committee in an unscheduled meeting raised repo rate by 40 bps to 4.40%, thereby resulting in the MSF and SDF rates to adjust upwards to 4.65% and 4.15% respectively. In addition, the RBI also announced a 50 bps increase in the CRR to 4.50% of bank’s NDTL (net demand and time liabilities).

What explains the sudden hawkishness?

To recall, the minutes of the Apr-22 policy review meet brought out the agreement among MPC members on the need for withdrawal of pandemic era monetary stimulus. While the members were more concerned about inflation, they were also cautious on the uneven and incomplete growth recovery. The Governor had opined for a gradual withdrawal of accommodation, stating that the risk to economic recovery, which is already strained by the current crisis, may get undermined if there is a rapid tightening of financial conditions.

In the backdrop of this guidance, the monetary policy and liquidity action in the unscheduled policy review in May-22 stands out as abruptly hawkish. It appears that the following factors could have prompted the central bank for an emergency rate hike:

o   Post the cumulative 75 bps hike by the Fed in 2022 so far, market pricing suggests likelihood of another 200 bps rate increase from the FOMC before the end of 2022.

With the RBI now doubling down on its efforts to unambiguously shift focus on inflation management, there is now a palpable urgency to address inflation risks. We believe mild downside surprises to growth (if any) is unlikely to sway the MPC from its inflation objective as of now.

After breaching the 6% policy tolerance threshold in Q4 FY22, CPI inflation is likely to persist above 6% levels in Q1 and Q2 of FY23. This will mark the second instance of the breach of the policy mandate. While the first instance (Q4 FY20 to Q3 FY21) was completely ignored on account of the novelty of the extreme shock from Covid, the MPC now appears to be decisive in addressing inflation risks with the aim of guiding CPI inflation near towards the 4% target in FY23.As such, we now revise our call and expect the RBI to hike repo rate by an additional 60 bps in the rest of FY23. However, if inflation pressures continue to mount there is a likelihood of an additional 15-40 bps hike thereby taking the rate to its pre pandemic level of 5.15% or higher by end FY23 (vis-à-vis our previous forecast of repo rate at 4.50% with risk of 4.75% before the end of FY23). The rate increase may get front loaded keeping in mind the elevated inflation risks in the near-term and the fast-evolving global monetary policy cycle.The action on monetary policy is also expected to be complemented with further calibration of liquidity surplus. As per the recently released RBI report on Currency and Finance, the central bank articulated that for every percentage point increase in surplus liquidity above 1.5% of NDTL causes average inflation to rise by 60 bps in a year. Post the 50 bps hike in the CRR (which will mop up Rs 870 bn from the banking system), we now expect the RBI to hike reserve requirement by another 50 bps in an upfront manner. Cumulatively, this would impound Rs 1.8 tn of durable liquidity from the banking system and help in amplifying the revised monetary policy stance.With the RBI monetary policy taking a sudden hawkish turn, we now see 10Y g-sec yield moving higher towards 7.50-7.75% range before the end of FY23. Having said so, we do expect the central bank to rely on tools like Operation Twist and verbal suasion, to stabilise bond yields and ensure an orderly completion of government’s record high borrowing program in FY23.Annexure

Chart 1: RBI hikes MSF, Repo and SDF rates by 40 bps each, maintaining the width of the policy corridor at 50 bps 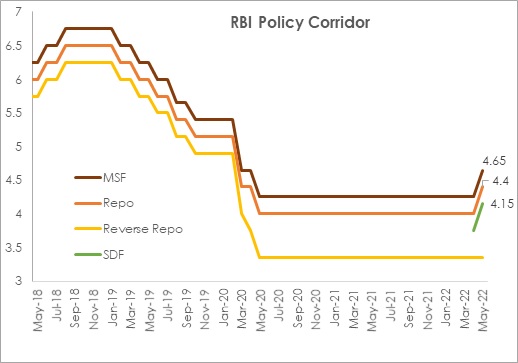