India’s CPI inflation surged to a 17-month high of 6.95% in Mar-22 vs. 6.07% in Feb-22. While market participants had expected a firming up of price pressures (Market consensus: 6.40%) in Mar-22, the upside surprise was sizeable given that increased retail fuel prices are still to be factored in the index. With this, Mar-22 marked the third consecutive month of CPI inflation remaining above the 6.0% threshold, averaging at 6.3% for Q4 FY22.Key highlights

Outlook
The headwinds from rise in commodity prices due to the continuing geopolitical conflict between Russia and Ukraine have already started to manifest in India’s inflation trajectory. Higher prices of retail fuel will translate to higher transportation costs for food and other products, leading to a potential rise in prices in those categories. Further, global supply disruption in food products such as wheat and edible oil, have started to impact the domestic prices of these products. For FY23, we stick to our upwardly revised estimate of 5.9%, premised on the assumption of crude oil price averaging at USD 97 pb, adverse global spillovers on food and other commodity prices and core inflation remaining firm amidst opening up of the economy. Our forecast, though includes a fiscal buffer in the form of a cut in excise duty of Rs 5 each on petrol and diesel each (For further details, refer our "Acuité Macro Pulse” for Mar-22 https://www.acuite.in/macro-pulse.htm). Reflecting impact of the Russia-Ukraine war, the RBI too in its recent policy upped its FY23 inflation forecast sizeably close to our estimate at 5.7% from 4.5% earlier.
Looking ahead, Apr-22 CPI inflation reading is likely to remain elevated amidst non-core price pressures from –


We continue to expect the RBI to hike repo rate by 50 bps in FY23, given the domestic inflationary pressures, the rise in interest rates in the developed economies and the higher sovereign borrowings. Looking at the projected trajectory of inflation and growth, we expect that the central bank may take such action in tranches between June and March FY23. Having said so, further acceleration in global commodity prices could potentially tilt the balance in favor of another 25-bps repo rate hike (not our baseline scenario as of now). 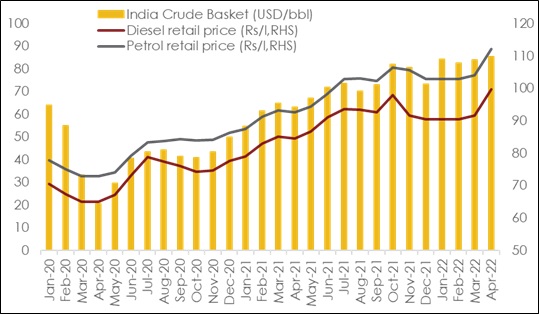