Acuité has undertaken an analysis of the overall rating migration data for the April-Aug period over the last 3 years. What emerges is a sharp recovery in the [1]Credit Ratio (CR) of the CRA industry from 0.56x in the previous year to 2.30x in the current year which is significantly higher than the levels seen in the pre-pandemic year i.e. FY20. 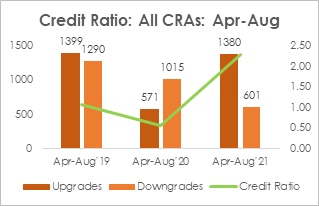 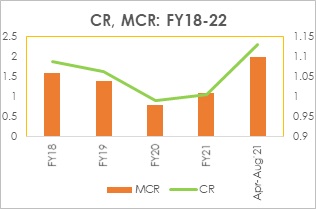 We have also looked at a longer time horizon since FY18 and analysed the movement of both Credit Ratio (CR) and [2]Modified Credit Ratio (MCR). While the volatility in the MCR is far less than the CR given the stability provided by addition of the reaffirmation cases, the trajectory in both the ratios first reflect the slowdown in the economy since FY19 which got severely aggravated by the Covid pandemic starting from the last quarter of FY20 and thereafter, the subsequent recovery that has been set in motion in the current year. Most of the downgrades that happened in the first half of FY21 had taken into account an actual or expected deterioration in the liquidity position and a severe impact on the business profile of the rated entity.

[1] CR is the ratio of upgrades to downgrades in a given period, non-cooperative issuers excluded

The sharp upsurge in the Credit Ratio in the first 5 months (Apr-Aug) of the current fiscal can be explained by the following:

The credit ratio across the various sectors highlights the following aspects: 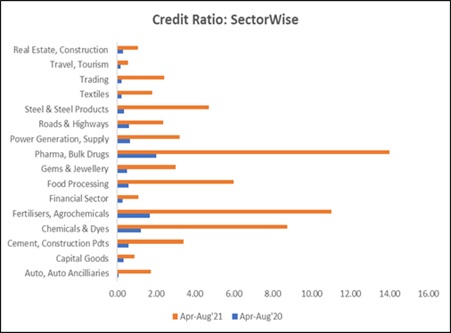