Acuité Ratings has undertaken a study on the financial performance of 1849 listed corporates that have published their second quarter (Q2FY22) results by end of Nov’21. The objective of the study was to understand the impact of the Covid pandemic on the business position i.e. both revenues and margins as well as the trajectory of the leverage in the balance sheet. The study covers a diverse set of companies across the manufacturing, services and the trading sector spanning large, mid and MSME businesses. For the purposes of this report, we have defined large corporates as those with quarterly revenues beyond Rs 500 Cr, mid-sized between Rs 50 – 500 Cr and MSMEs as those with total income less than Rs 50 Cr per quarter. In our study sample, 31% are MSMEs while 47% are from the mid-corporate sector and the balance 22% represent the large corporate sector.

An overall analysis of the aggregate corporate portfolio highlights the following: 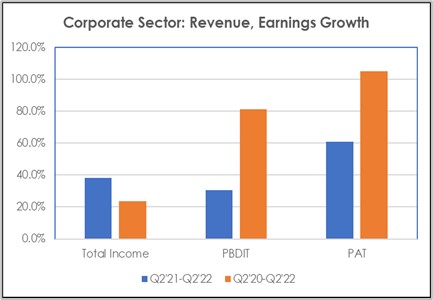 As regards the debt levels of the sample portfolio, it has increased at an annual average of 11.9% over the last two years. We reckon that this is primarily due to a pickup in working capital borrowings including the facilities provided and availed under Emergency Credit Line Guarantee Scheme (ECLGS). Higher cost of commodities and raw materials have been a factor over the last one year. This, however, has not been reflected in banks’ credit growth as a part of the additional borrowings might have been raised through debt instruments. However, we believe that the reported growth in borrowings will start to drive a moderate level of credit growth in the current year. 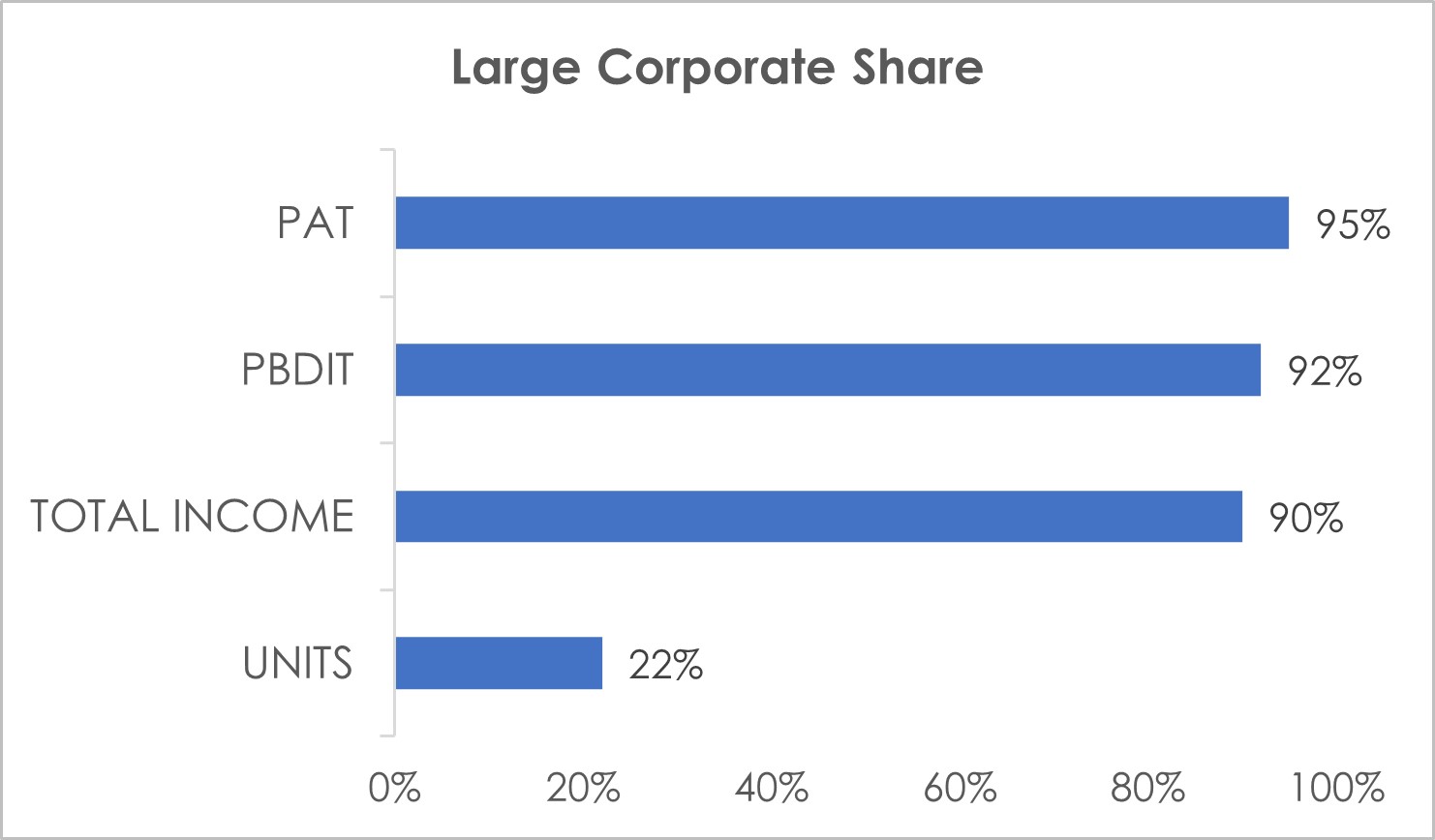 Having said that, the leverage levels haven’t really increased in the corporate sector in a material manner, going up from 0.50x as on Sep-19 to 0.55x as on Sep-21 given that internal accruals have also risen in a healthy way.
What is noteworthy is the average of the top listed companies in India is relatively low and at a collective level, they have the flexibility to raise debt for the upcoming private sector capex cycle. The study reveals that 63% of the companies in the sample portfolio (excluding a few where the networth data was not available) had a conservative leverage of less than 0.5x as on Sep-21.

As the next step in this study, Acuité has split the sample portfolio into Large, Medium and MSME groups as mentioned earlier, depending upon their quarterly revenues. In our sample, there were 411 companies that had quarterly total income of Rs 500 Cr or above and therefore, they have been categorised as "Large Corporate Sector”. 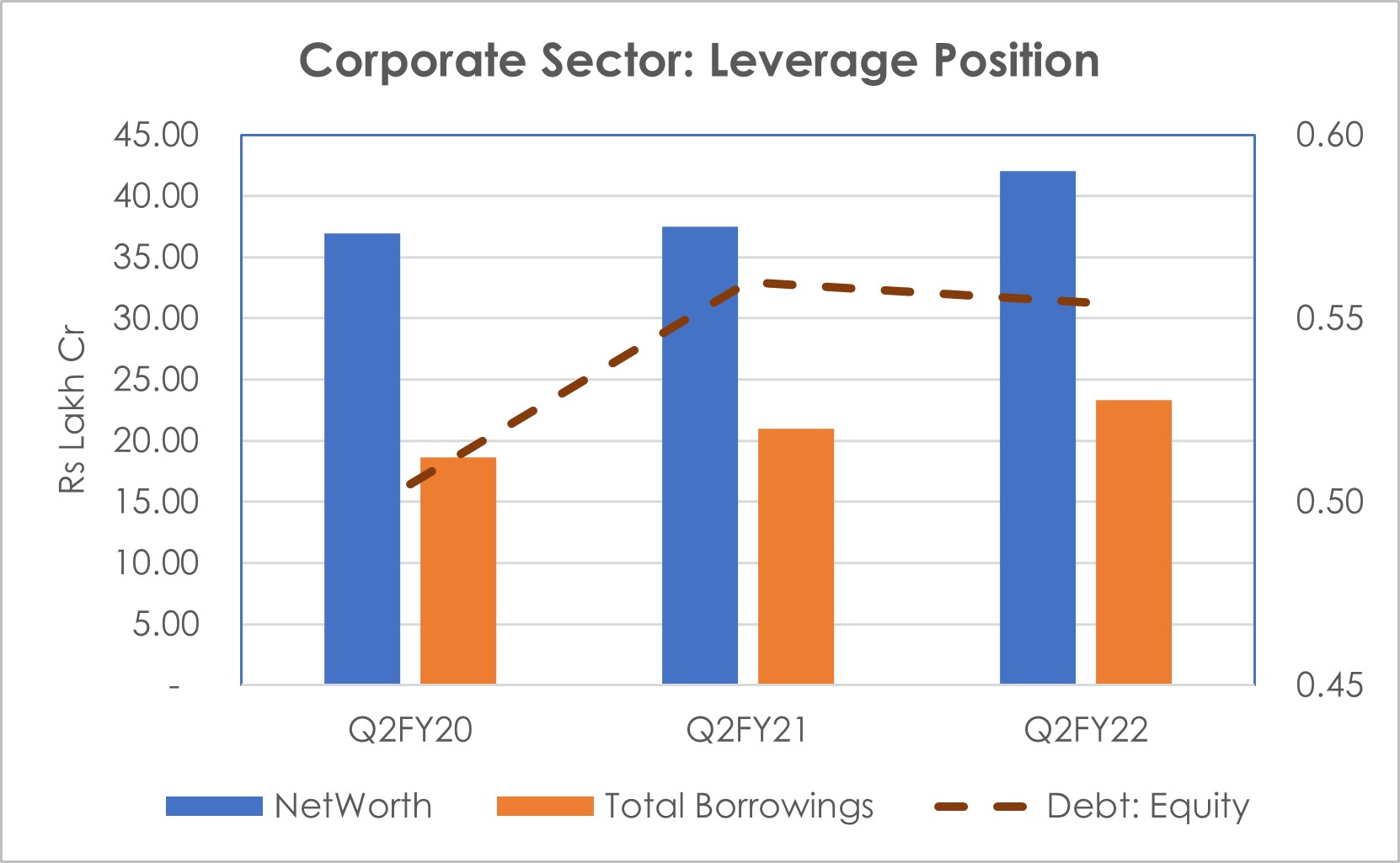 It is interesting to note that while large corporates comprise only 22% of the sample population, it accounts for a dominant part of not only revenues but also operating profits and net profits. While this has been the broad pattern even before the pandemic, we note that the share of large corporates in aggregate profits has slightly increased during the pandemic period. The economies of scale apart, large corporates also benefit from a superior leverage position and finer interest rates. 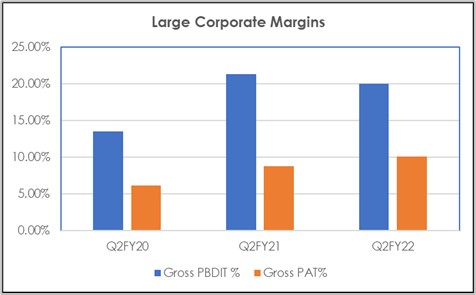 The large corporate pool largely mirrors the overall performance of the sample population:

In our sample, there were 875 companies that had quarterly total income between Rs 50 and Rs 500 Cr and therefore, they have been categorised as "Mid Corporate Sector”. This comprises the bulk of the sample population in volume terms (47%). 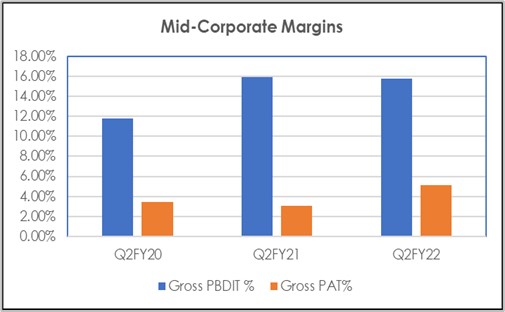 The sample consisted of 563 companies that had quarterly total income less than Rs 50 Cr and they have been designated as part of the "Small and Medium Enterprises Sector”. This comprises a sizeable 31% of sample population in volume terms. 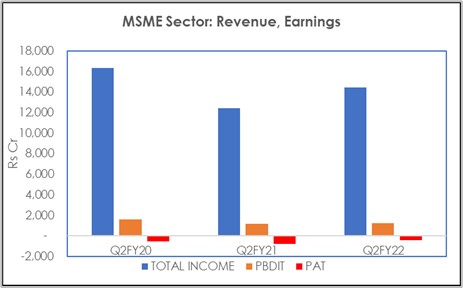 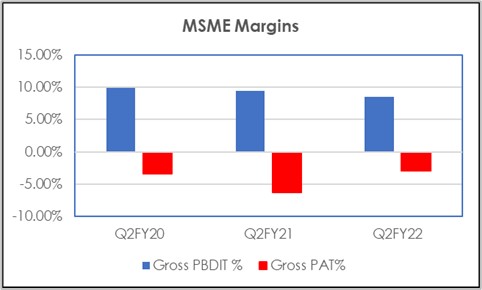 It is pertinent to note that the revenue and the profitability trajectory for the MSME sector has been significantly different as compared to large and mid-corporates. 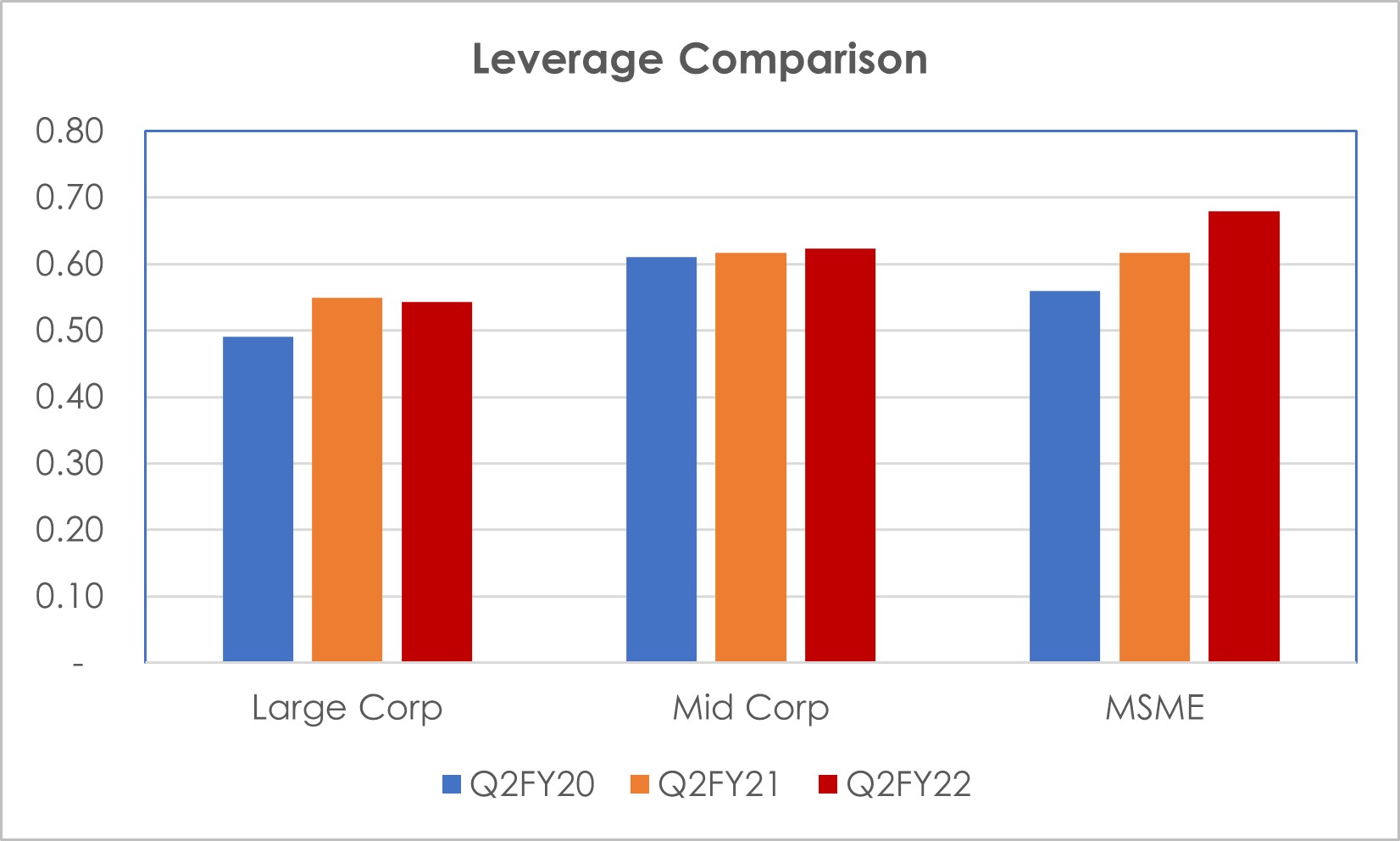 Source: CMIE Prowess, Acuité ResearchA comparison of the leverage position across the corporate segments indicates that the pandemic has not led to any sharp increase in borrowings or leverage in any. For both large and mid-corporate on a collective basis, the leverage levels have been very stable in the last two years. There has been, however, a moderate increase in leverage in the MSME sector due to weak earnings and some increase in working capital borrowings including the ECLGS facilities that were available at fine rates.