India’s CPI inflation surged to a near 8-year high level of 7.79% YoY in Apr-22 from 6.95% in Mar-22. While market participants had expected a firming up of price pressures (Market consensus: 7.4-7.5%) in Apr-22, the upside surprise was nevertheless substantial. With this, Apr-22 marked the fourth consecutive month of CPI inflation remaining above the 6.0% policy tolerance threshold.Key highlights

Outlook
CPI inflation has made rapid strides in the last two months partly fuelled by the geo-political crisis. While the directional move was anticipated, the accompanying strong momentum has been a surprise to market participants as well as RBI.

The sharp bump up in prices in last two months will shift the anticipated inflation trajectory upwards for FY23. In this context, we note that:

There can be some respite from the likelihood of a normal monsoon outturn. As per the IMD, the upcoming south-west monsoon season could see normal rainfall at 99% of the long period average. Early onset by approximately a week (Kerala could see the first showers on May 26th as per the private weather forecaster Skymet) if accompanied by a normal distribution could potentially help douse some of the seasonal pressure on food prices.

Nevertheless, food inflation could continue to face pressures from global factors, esp. ones impacting agricultural inputs, which in turn could potentially manifest in higher announcement of MSP by the government.

Considering the above mentioned factors and assuming price of Brent to average at USD 100 pb in FY23 (benchmarking it to the available monthly futures until Mar-23) vs. USD 97 earlier, we revise our CPI inflation forecast of FY23 to average at 6.5% vs. our previous estimate of 5.9%. While the government has already announced an export ban on wheat to ensure its domestic availability and tame the price pressures, the government could also consider a partial absorption of the increased crude oil prices through a further excise duty cut on petrol and diesel which could provide marginal comfort to fuel inflation.

With an aim to mitigate inflationary pressures and keep inflation expectations anchored, the RBI in a surprising inter-meeting move raised repo rate by 40 bps to 4.40%, resulting in the MSF and SDF rates to also adjust upwards to 4.65% and 4.15% respectively. In addition, the RBI also announced a 50 bps increase in the CRR to 4.50% of bank’s NDTL (net demand and time liabilities).

Given the tone of urgency in RBI’s statement to support the altered inflation-growth dynamics, we now revise our call and expect the RBI to hike repo rate by an additional 60 bps in the rest of FY23. However, if inflation pressures continue to mount there is a likelihood of additional hikes thereby taking the rate to its pre pandemic level of 5.15% or even higher by end FY23. Additionally, we also expect CRR to be hiked by another 50 bps by H1FY23. 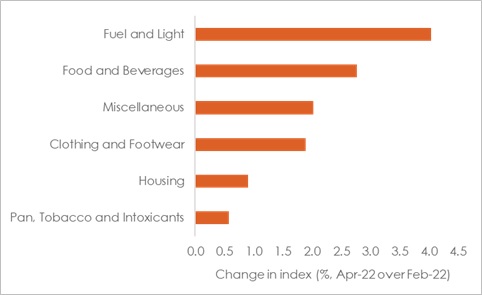